Game Changer? Going viral for all the wrong reasons 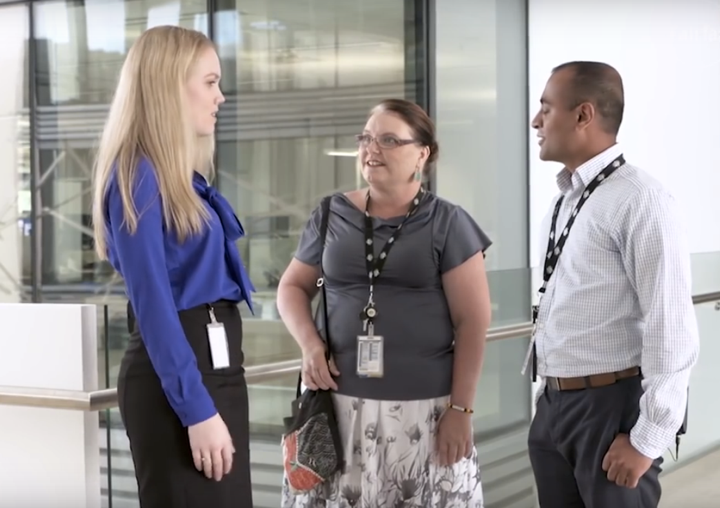 “Hey guys, I’m just heading downstairs for my Paleo pear and banana bread, would you like to join me?”

And so begins three of the most awkward minutes in recent video production memory. The production in question is the $4000 dollar “Game Changers” campaign by the Department of Finance, aimed at enticing new graduates to join the department’s grad program. It has certainly changed the game but, unfortunately for the department, for all the wrong reasons.

If you haven’t seen it, here it is.

The conversations between the many employees at the department are about as genuine as Donald Trump’s hairline. Shoehorned into embarrassing exchanges between colleagues are some of the key messages the client wants to get across. “Hey buddy! Sorry, I always say that; it’s because we are in the buddy program. I’m so pumped for my presentation to the executive today; it’s so great to have access to them” and so on, and so on, for several more soul-destroying minutes.

The production has spread across the globe like wildfire, being redubbed, parodied and written about from all angles.

Debate has raged about who is responsible for it. Some are angry at the media for what they see as throwing the agency under the bus; others blame the client for not taking responsibility for the end product.

Get the best from your video production budget

$4000 is not a huge budget and a LinkedIn comment I read argued that it is “impossible to make a good video with actors, scripts, etc., for that budget”. This begs the question why no one at the agency stepped in and stopped it.

Sometimes we get a brief sent to us by clients that we know isn’t going to work. Usually, one of the biggest alarm bells is when companies want to use their own people as actors. Using your own people is a great idea if it’s done right. Who better to advocate for your organisation than your own people? But let them do it in an authentic way, perhaps through interviews.

It’s clear from the script in the Department video what key messages they were trying to get across, but when non-actors act, the results are there for all to see (and write about and generally mock).

A better way to get your message across in video

In my opinion, the size of the budget was not the problem – granted it wasn’t huge – but for me the real problem is that no one at any stage said that perhaps there was a better way to spend it. The role of the agency shouldn’t just be to “do”; you have to be able to step in and advise if you believe there is a better way to do something.

In a world where there is so much competition for people’s time, being authentic is not just something to be considered; it’s a necessity. When you throw in normal employees and make them act out a script full of unbelievable dialogue, you end up all over social media and even the international news, for all the wrong reasons.

If you want to pop into Lush for some Paleo pear and banana bread, you might be disappointed. But we can certainly help you create a recruitment production that has people talking for the right reasons, even if you only have $4000 to spend.