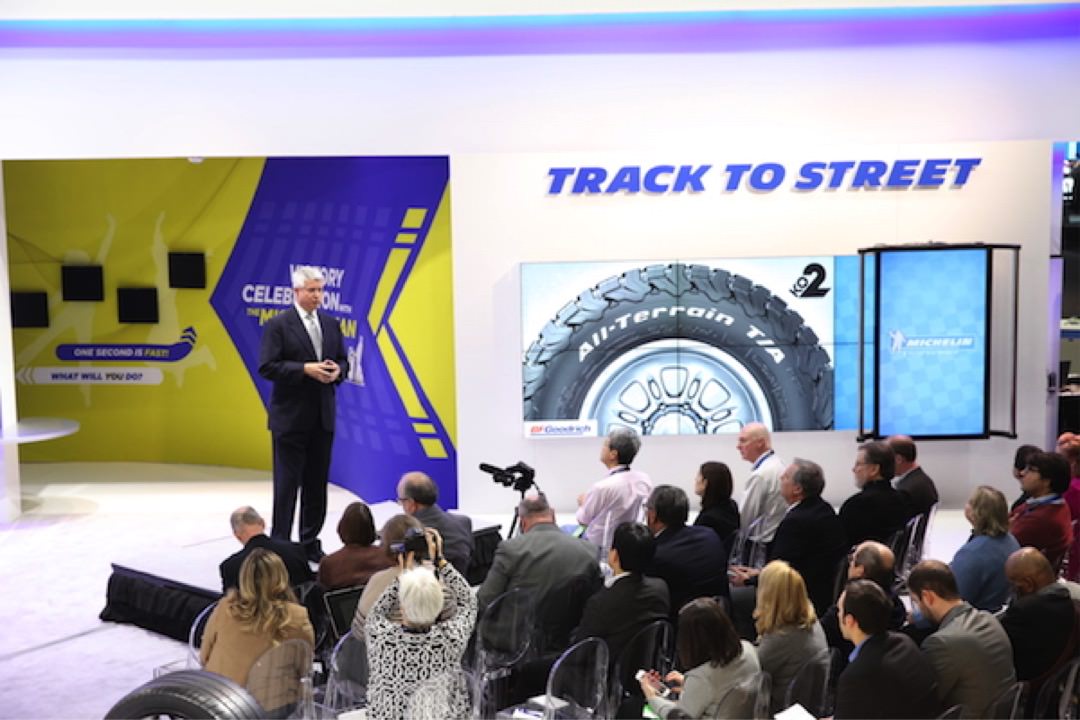 Are you covering industry events as part of your content marketing strategy? It’s a great way to find a bottomless source of inspiration and make good contacts for future content projects. As a brand journalist, you have every opportunity to rub shoulders with traditional media and report on the latest news and industry insight coming out of events. If you’ve never attended an event as part of the press, here’s what you need to know. 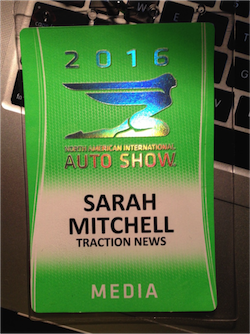 Last month I had the opportunity to attend the North AmericanInternational Auto Show (NAIAS) in
my role as Chief Editor of the Traction News magazine. The auto show is a massive event I’ve attended many times but never as part of the press. It was also the biggest media event I’d ever attended so I called on my friend and Traction colleague, Dan Hatch, to fill in some of the blanks for me. Dan is a lifelong journalist and had lots of valuable advice. Here’s our combined primer for brand journalists attending industry events.

Check out the event website as soon as possible to find out how to obtain media credentials. Look for a web page titled “Press” or “Media.” You’ll have to fill out an application and prove you’re a bona fide journalist. One of the most common requirements is a publishing history. You’ll want to make sure you have a byline in at least three articles before you apply.

You’ll also want to bookmark the event website because you’ll refer to it repeatedly throughout the event and after when you’re reporting on it.

Applications for press credentials commonly close about two weeks before the event. The bigger the event, the sooner they start vetting who will be allowed in. Don’t assume you can rock up on the day and gain entry.

If possible, email the PR people you want to meet before the event. Tell them you’re coming and ask if they have any content to share prior to the event. They’re usually good at sending video, photos or graphic images to help you with your story.

I had every intention of getting to the NAIAS early but a bad winter storm more than doubled the length of my traveling time. As a result, I arrived about 10 minutes before my first press conference. I wouldn’t recommend it. I felt frazzled and I had worried for the last hour of the 3.5-hour drive that I would miss it altogether.

When you do arrive, make sure you have proper identification including photo id and proof of employment from the publication you’re representing.

There’s another good reason to be the early bird. “Seats go quickly in media rooms, so go early and stake out your territory,” says Dan. “The media room Wi-Fi will be the best for miles.” 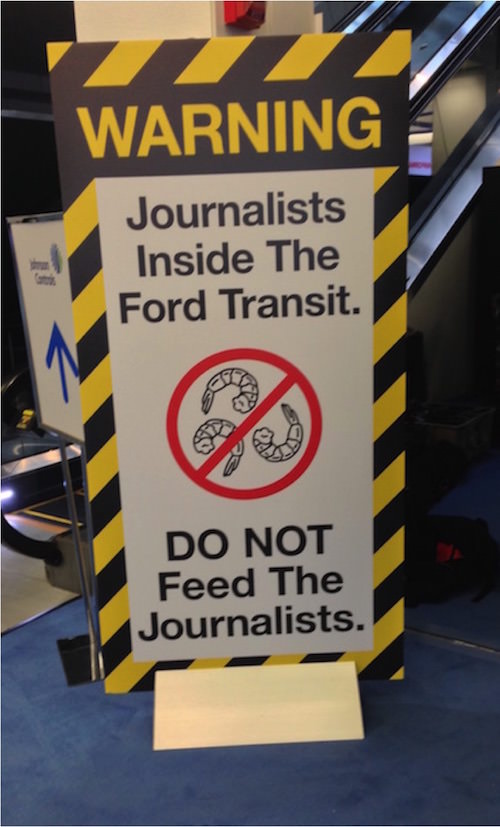 The media room is a great place but it’s not for the fainthearted. If there’s food or drink on offer, you need to get in quick. Journalists are notorious for scarfing free grub. Even Ford made a tongue-in-cheek reference in one of the press day exhibits.

While they’re mostly an affable group, journalists have been known to have sticky fingers.

“Don’t leave stuff unattended in the media room,” says Dan. “They might leave your laptop but they’ll probably pinch your cables.”

Grab a seat in the first or second row of the press conference. Inexplicably, the seats at the back fill up first. Sitting in the front gives you a chance to make an audio recording of the conference and get better photos. An audio recording is especially helpful if you’re using quotes in your story.

Introduce yourself to the PR people

The key person for you to meet is from PR, not marketing. The PR people are entirely focused on getting press coverage, so they’ll be the most receptive to dealing with you.

“While you’re at the press conference, track down the press person and get their contact details,” says Dan. “Believe it or not, the contact details might not be on the press release,” he says. “It’s so much easier than running around trying to find the right people later in the day.”

Take business cards and make sure to hand them out. It’s a great way to get on the mailing lists of the companies you’re trying to cover. On the day of the event, the PR people will be massively busy and give priority to the biggest media companies there. As a brand journalist, it’s hard to compete with the nightly news but PR people do get back to you after the event.

Take two photos for each image

Getting photos is an important part of the day at an event and you’ll want to be snapping away.

“Getting the caption right is the most important part,” says Dan.

“I suggest taking a picture followed immediately by a picture of any little sign or marker describing what you’re seeing. That way you’re not relying on memory or risking getting lost in scribbled notes. Honestly, I’ve learned this lesson the hard way over the years.”

This is good advice but harder than you might imagine. In the digital age, most of the product descriptions I saw were on electronic signs with moving digital images. Trying to capture the right description was difficult. For example, I know this photo is a BMW but I couldn’t pin down the specific model the week following the show. It’s still a mystery. 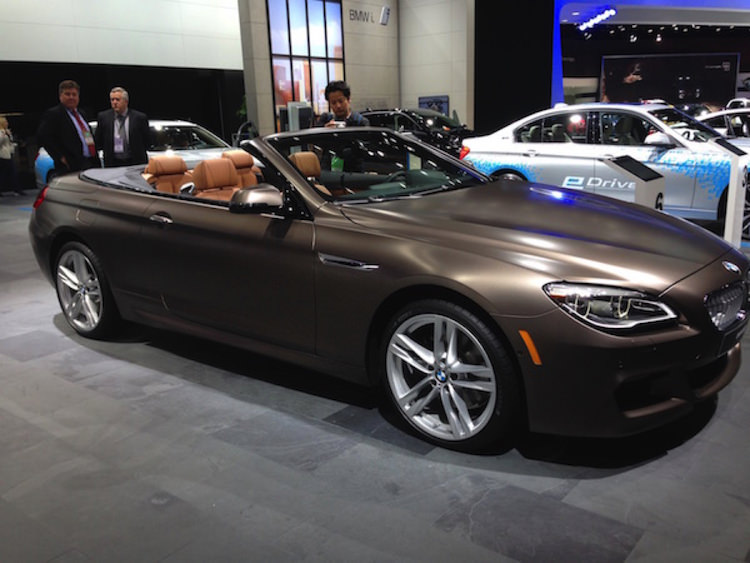 Most brands will have product information on USB sticks. If you’re having trouble getting descriptions, make sure to hit up the PR people.

“The lead/angle becomes apparent while they’re talking,” says Dan. “You’ll have the formal press release in hand, and your brain will be hot with detail. It’s much easier to write it immediately than going back to it later.”

Make your own quiet

Take earbuds or noise-cancelling earphones with you if you plan to write at the event. A media centre is not a library and it can get super noisy.

Email the PR departments of the companies you cover in your brand news and share links to your articles. It’s a great way to build relationships and they almost always share them around, which helps promote your brand publications.

If you’re running a brand newsroom or using your blog as a way to build authority in our industry, consider covering industry events as part of the press. You’ll benefit from being the first to understand upcoming trends and product development. You’ll certainly walk away with ideas for lots of different content pieces. The industry contacts you’ll make will be invaluable. Don’t be surprised if some of the influential people in your industry begin to view you as a vital influencer, too.

If you’d like to know more about how to develop a media mindset, call Lush – The Content Agency. Our office is filled with traditional journalists working to help brands communicate more effectively.

All other photos taken by the author