Brand Journalism: How to write a good lede 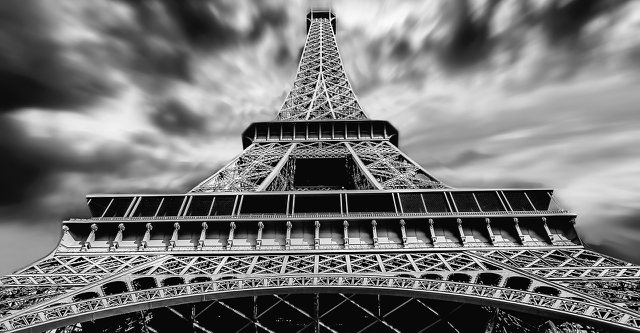 Getting that first sentence right — finding the perfect words to capture the reader’s attention and hold it — can be tricky.

For some of us, it’s a delicious challenge. Do I paint a picture or hit them with the facts? Do I metaphorically punch the reader in the gut? Or do I woo them into the story gently?

For others, finding the right words to start an article (or a blog post or a newsletter or a letter to Great-aunt Joan) comes somewhere on the pain chart between diving into a hornet’s nest and pouring acid into their eyes.

So, what’s the secret to writing a good lede?

Start with the basics

If writing doesn’t come naturally to you, there’s one tried and tested method used by journalists the world over — the “inverted pyramid”. (This is the advice you’ll get everywhere on the internet, but I’m going to build on this a little later).

The most important information is almost always the stuff that answers the questions:

And, often somewhat less so:

Just getting this information down in a sentence is usually a good place to start. It means the page is no longer a blank white sheet staring back at you, mocking your ability to write. These can be relatively simple sentences, but they are crammed with information.

Let’s take a story from the Zeitgeist and see how the journos do it, before we get down to how brand journalists can use the same technique. This is from the Daily Mail.

The opening sentence gives you the basics of the story, so you can quickly tell what it’s about and decide whether you want to read on. If you do read on, then you get the next most important information, and on it flows through the article. This is where the writer answers in more depth the questions:

So, does the ‘inverted pyramid’ work for brand journalism?

Of course it does. If you’re doing brand journalism properly then you’re not writing to sell anything, you’re writing to give your audience valuable and relevant information. If you’re trying to shoehorn a sales message into your copy, then you’re doing content marketing all wrong. At that point, you’re a copywriter. (Which is a fine skill, but it’s not brand journalism.)

Everything you write as a brand journalist should be written with the audience in mind. So why wouldn’t you write your lede the way a journalist would write theirs? After all, your audience wants the “who, what, when, where, why, how” questions answered, too, right?

Mix it up a bit

Not every story a journalist (or brand journalist) writes starts the same basic way. The following examples are great ways to mix things up a bit — starting from the easiest to achieve and ending with the hardest.

First, take a look at this article from the BBC.

“Kim Kardashian has spoken about being robbed at gunpoint in Paris last year in an interview on the Ellen DeGeneres Show”.

It would be completely accurate and perfectly acceptable. But the story becomes more interesting when you put a human angle in the opening sentence. In this case, the BBC journalist has told us how the robbery affected Kardashian, then she’s gone on to give us the “who, what, when, where, why” information in the next two sentences.

Often I’ll start with a traditional “who, what, when, where, why” introduction, get the whole story written, and then I’ll go back up to the top and put a new sentence before the introduction, to add a bit of emotion or interest, in just the way this article has done.  After all, sometimes the bare facts of the story aren’t the most interesting point — they aren’t the things that tell the best story.

All that information in the original opening sentence is still important (and you’ll use it, probably slightly reworded, in the next couple of sentences) but sometimes you want to give the reader a different experience, to entice them into the story rather than just hit them with facts. This is a simple technique that helps you achieve that.

Another option is to appeal to the reader’s curiosity, like this article from the Mirror.

If you’re interested in Kim Kardashian, you’re going to want to know how she felt, so you’ll read on. And here’s what’s in the next couple of sentences of that story:

Once again, the “who, what, when, where, why” stuff comes next. You don’t actually find out how Kim felt until the next sentence — four paragraphs into the story. A tease like this is a great way to get a reader hooked into a story and draw them closer to your call to action.

Get creative (where it suits the story)

Once you have confidence with these sorts of techniques — once you’ve dabbled a bit with more creative introductions — you can really go for broke. Eventually, you’ll be skilled enough to go “Full Vanity Fair” — where the story is told in such an intoxicating way that, even though you hate Kim Kardashian, you can’t help but read it because the writing is so engaging. 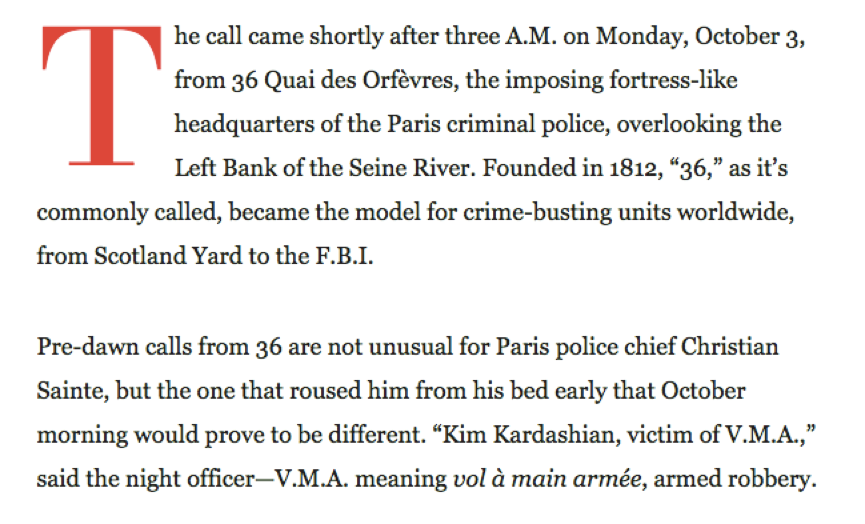 This article spends ages telling the story of the night Kim Kardashian was robbed, but from a completely different perspective. It’s such a great idea. A great lede can catch the eye for many different reasons, but giving the reader a completely new twist, something fresh, is a great way to engage them.

Knowing what style to use

Whether you go in with the hard facts, the “who, what, when, where” question, or get more creative, is really up to you and the demands of your audience. Consider whom you’re writing for, how they consume their information, and which approach will work best for the article you’re writing. You should also consider when you’re going to publish it. Is it during the week, when your audience is likely to be busy? Or is it on the weekend, when they might have time to sit down and read the 2000-word “Vanity Fair” version?

I’ve used a news story as the example here because it’s hard to find four or five articles about the same topic within (for example) accounting, or spectacle retailing, or mining industry recruitment that are all written with such journalistic range. But, of course these techniques work just as well in brand journalism as traditional journalism. The constants here are:

It doesn’t matter if you’re writing about the latest bifocals or the government’s new taxation regulations; you always need to meet those three factors. Being able to write a good lede gives you the best possible chance of the article succeeding. In other words, it might suck to write a lede, but it doesn’t mean the lede has to suck.

If you’d rather someone else wrote your ledes for you, Lush — The Content Agency can take the pressure off. We have an expert team of journalists and editors who love doing this (way more than they love Kim Kardashian, we promise). Get in touch.