10 ways executive communication can make or break a crisis 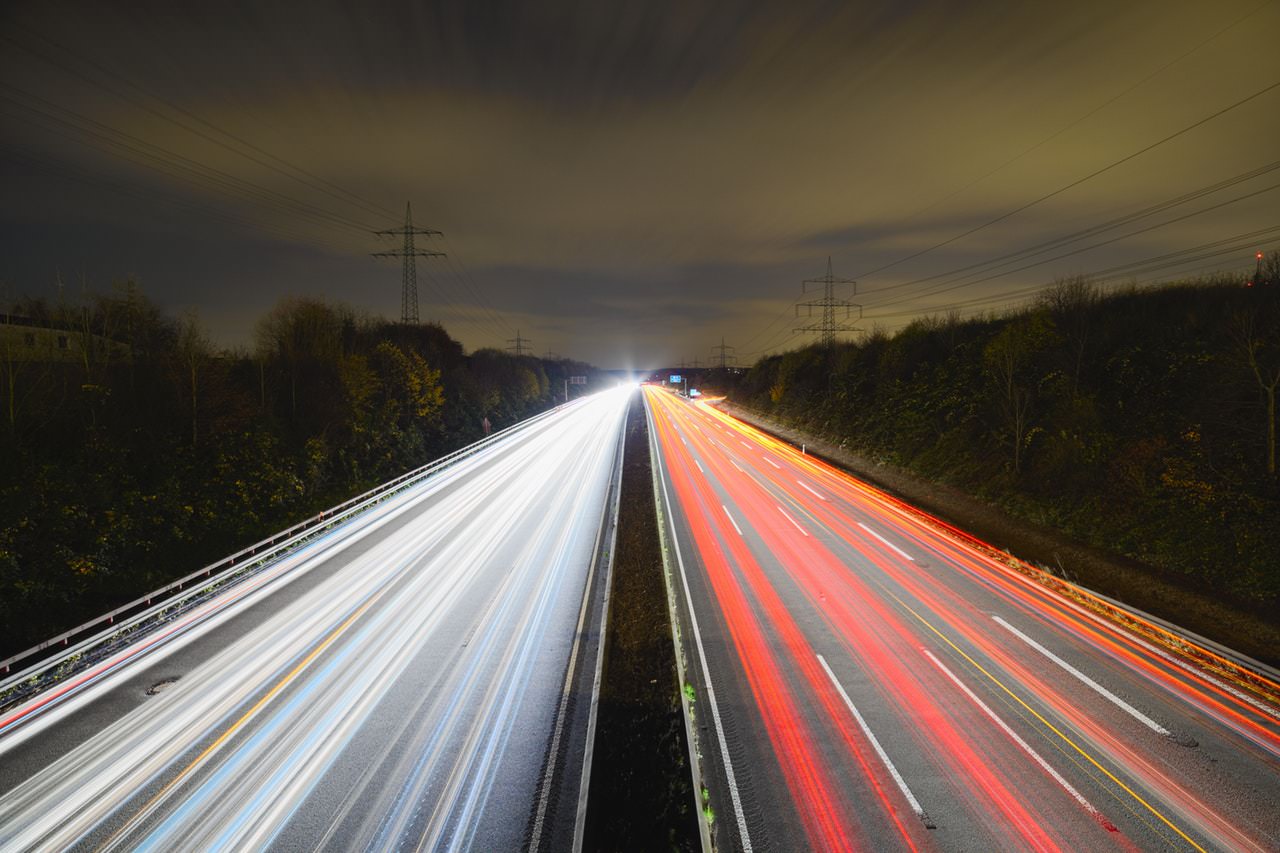 When faced with a crisis, how do you handle tough questions?

Do you deny, evade, divert or hide?

Unfortunately, these are tactics used by executives and people in leadership roles far too often. Regardless of the industry or issue at hand, how you approach your audience can make or break you.

That’s why getting some media training for your executives is so important. Current events are giving us a rich vein of bad examples, but also a few great ones.

Harvey Weinstein’s representatives issued the following statement in the early days of accusations about his behaviour with women. It specifically addressed a repeated concern the women had that their career would be ruined if they came forward:

“Any allegations of non-consensual sex are unequivocally denied by Mr Weinstein. Mr Weinstein has further confirmed that there were never any acts of retaliation against any women for refusing his advances. Mr Weinstein obviously can’t speak to anonymous allegations, but with respect to any women who have made allegations on the record, Mr Weinstein believes that all of these relationships were consensual.”

Obviously, Weinstein didn’t expect the whole thing to unravel so quickly and scores of women have come forward with similar stories of abuse. In light of news he hired private security agencies with elite military and government intelligence experience, he got caught in a double lie about consensual relationships and acts of retaliation. 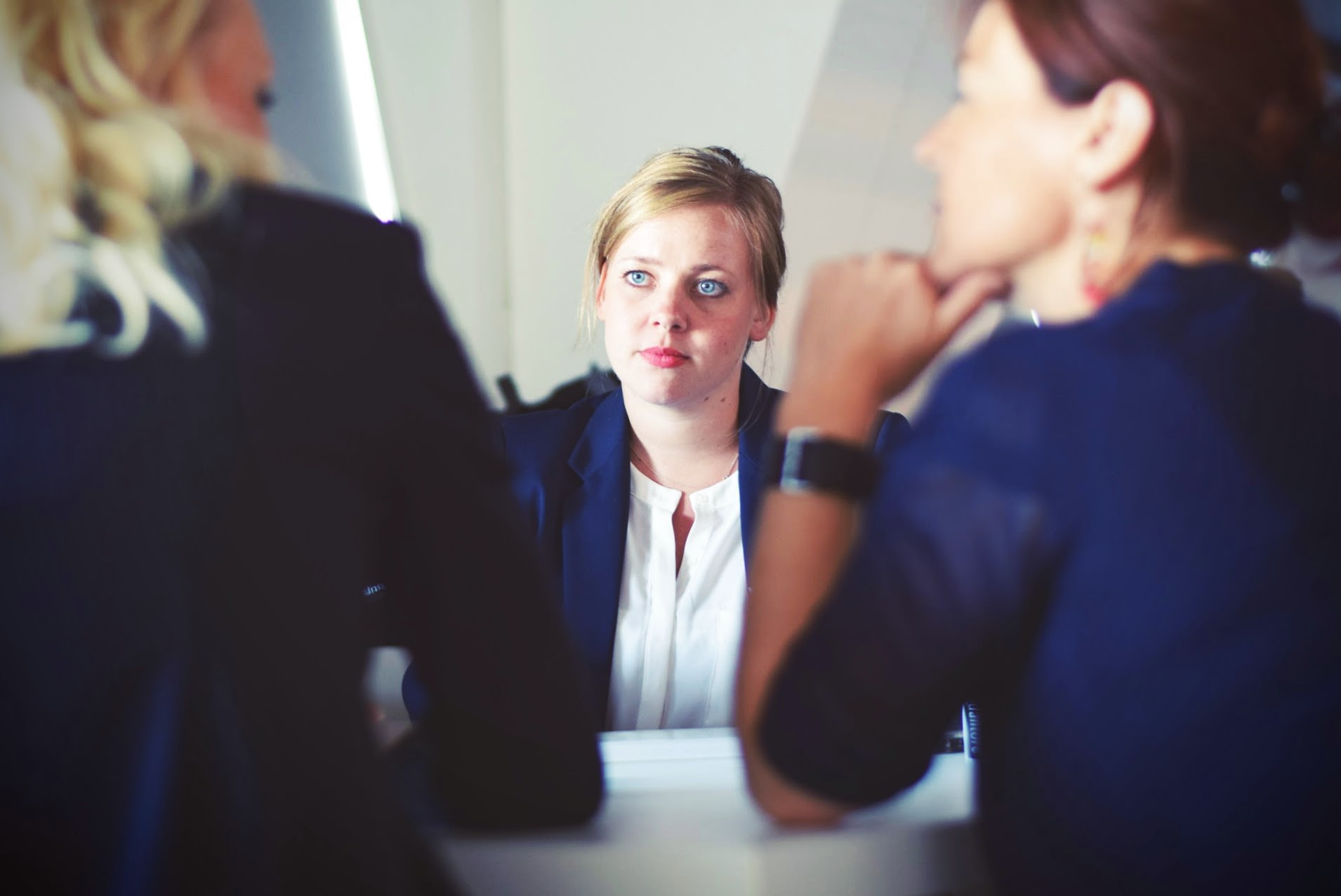 Ian Narev, former CEO of Commonwealth Bank, was so ‘on message’ in replies to direct questioning about a mounting scandal, he looked dishonest.

Despite the lambasting from Leigh Sales about ripping off customers with dodgy financial advice, denying life insurance payments to terminally ill people and helping fund drug dealing and terrorism, Narev repeated one key theme over and over as an attribute of the bank: trust.  It’s no wonder he resigned a week later.

Divert attention away from an accusation

Kevin Spacey tried to cover his tracks by divulging what’s been accepted as common knowledge for decades. As of this writing, 15 men have piled on, making Spacey’s attempt to change the subject an even bigger train wreck. 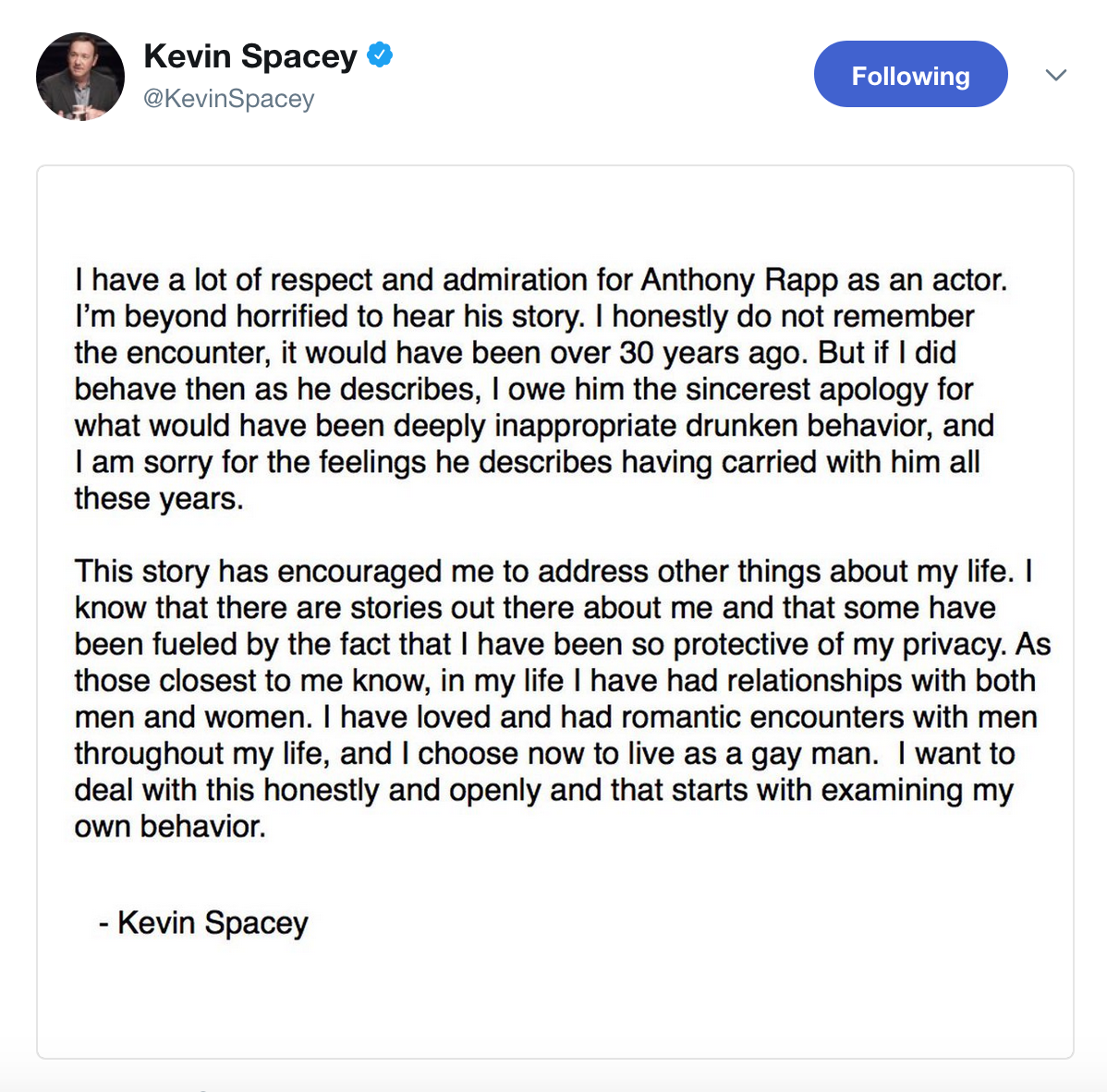 Weinstein made a similarly weak mea culpa in the New York Times, asking for a second chance. To date, more than 70 women have made allegations against him and he’s being investigated by the New York Police department for criminal behaviour.

FURTHER READING: Media Training 101: How to survive a tough interview

Hide behind the law

The Catholic Church has hidden behind the law for decades to cover up abuse claims all over the world. Weinstein was good at getting women to sign non-disclosure agreements as part of pay-offs for abuse allegations. Bill Cosby used the same tactic to preserve his reputation.  Bill Clinton famously denounced his relationship with Monica Lewinsky, splitting hairs about what constituted a sexual relationship.

The issue of trust

The problem with all of these tactics is they erode trust in your leadership. Maybe not in the moment, but in the era of too much information, the truth leaks out. When it does, judgement is always harsh. Not only do you have to deal with a situation you’ve tried to avoid discussing, you also have to address the deception.

It may be why Louis C.K. confessed to his own bad behaviour. He got in front of the story by delivering an unreserved apology, the first rule of handling a PR crisis.  He’s still receiving criticism but the bloodhounds have largely moved on.

When you combine power, money and plain old human nature, it’s not surprising organisations get into trouble trying to avoid a scandal or controversy. It’s difficult — if not impossible — to restore trust with your audience once that trust is broken.

[tweet] When you combine power, money and plain old human nature, it’s not surprising organisations get into trouble trying to avoid a scandal or controversy. #mediatraining[/tweet]

FURTHER READING: How to build trust with your consumers

Courage to be honest

One of the most courageous examples of executive communication I’ve ever seen came from the board of directors at Black Dog Ride (BDR), a not-for-profit organisation based in Western Australia. BDR’s mission is to raise the awareness of depression and suicide prevention, especially in rural Australia, especially among men.

The title of the email, Message from the Board – Resignation of Steve Andrews, said it all.

“Steve Andrews, the Founder, Chief Executive and Managing Director of Black Dog Ride Australia Limited has advised the directors that, due to personal health issues, he is resigning his position with the organisation effective today.

This is Steve’s personal decision and is one respected by the Board. We appreciate this will come as a shock to the many supporters and stakeholders in BDR, and we request Steve’s privacy be respected.”

Personal health issues can mean anything, but it was serious enough for Steve to resign from a project he described as a personal crusade. But here’s why this newsletter was so courageous: Steve wrote a personal letter following the board announcement and held nothing back.

I encourage you to read it, even if you don’t know Steve or have never heard of Black Dog Ride. In a few paragraphs, he explicitly described his health problem, the root cause and additional issues contributing to the condition. It’s a frank assessment of his situation, warts and all. It puts speculation to rest and allows him to unload a little bit without compromising his professionalism.

His announcement was a love letter to content marketing, the people that helped build his company and the cast of characters who were instrumental in the success of CMI.

Joe proved, once again, he’s one of the nicest people in marketing by making sure to give credit and include everyone for the success he’s enjoying.

I had the pleasure of being at the launch of Chorus, a business formed by merging three established not-for-profit brands into one.

It’s a difficult thing to get messaging right but even harder when you’re speaking about three distinct companies operating as one. Dan Minchin, the Chorus CEO, recited the new brand manifesto word for word at the launch event.

You never would have guessed it was anything but a leader speaking from the heart about his new company because it sounded completely natural. The language used and the sentiment it contained perfectly supported the brand and encapsulated the organisation Dan is leading. He’s a talented speaker, but no amount of talent can save a poorly constructed message.

Lush’s managing editor, Dan Hatch, put a personal spin on a politically and emotionally charged topic with a post about the importance of communicating to your internal audience — your staff.

Dan spoke eloquently about why the marriage equality debate in Australia was important to him and what it meant for his employer to offer a supportive stand on the controversial issue.

It’s a great example of how leadership can show a vulnerable side to create more effective communication with their readers. 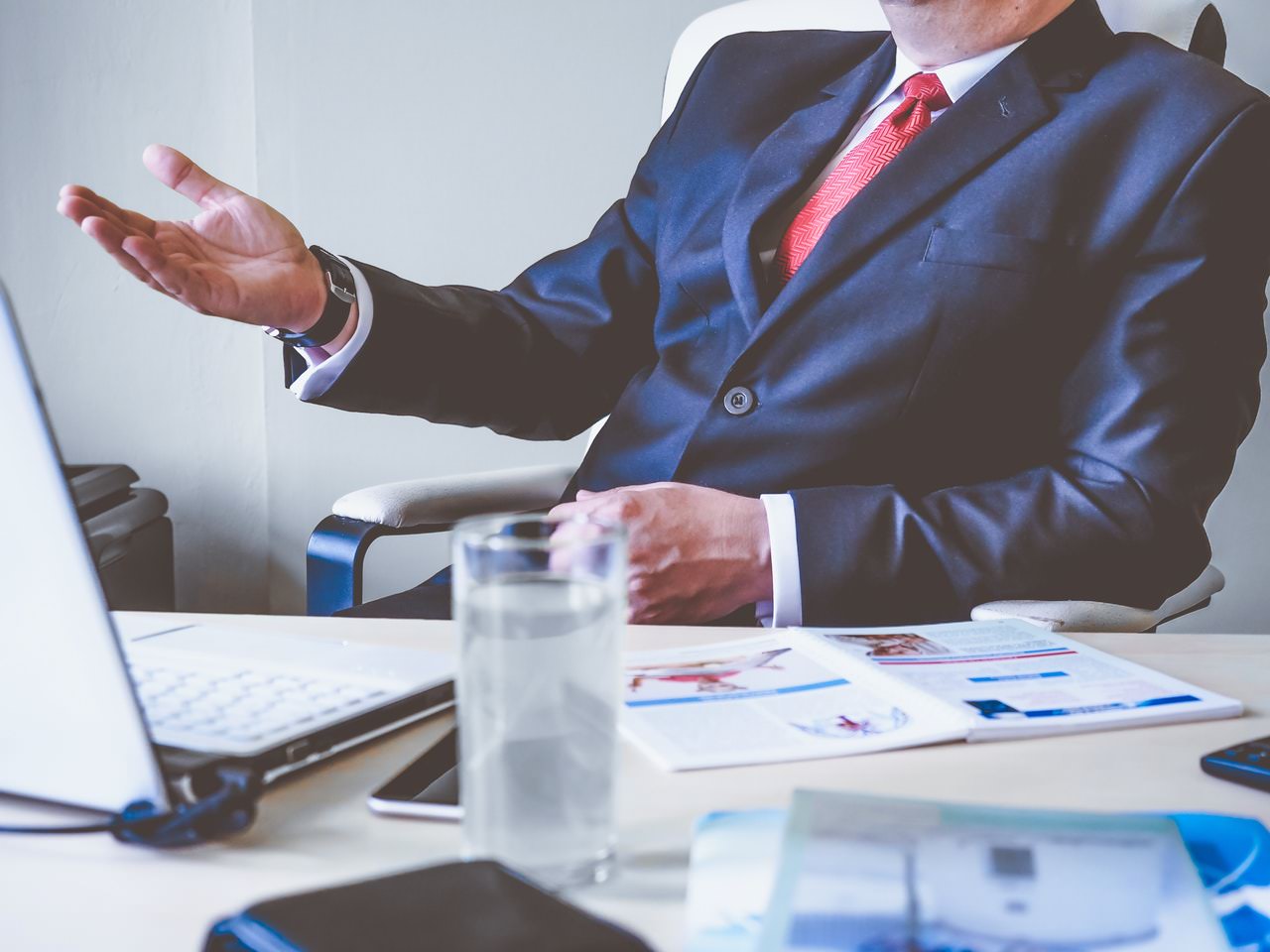 Why trust has to be your fallback

The best plans of marketers go out the window in the event of a crisis. How your leadership team responds can be the difference between fostering scandal or loyalty with the people in your audience.

The key to everything is focusing on your words and actions and determining if they are going to build trust or tear it down. Forget about deny, evade, divert and hide. Instead, embrace courage, love, trust and vulnerability. It might not seem like the obvious choice, but you’ll come out stronger if you do.

[tweet] The key to avoiding worsening a media crisis is focusing on your words and actions and determining if they are going to build trust or tear it down. Forget about deny, evade, divert and hide. #marketing #crisiscomms [/tweet]

Get in touch with Lush if you want help dealing with executive communication or managing a crisis. We have media training workshops that will help you perform well in the media during any crisis.